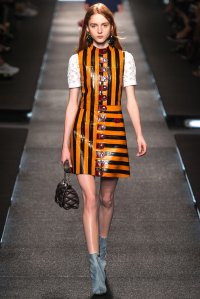 Keeping himself free from unwanted contamination is of utmost importance to Damiel, the iconic alchemist.  This Louis Vuitton (Spring 2015 Ready to Wear) patent leather/pleather dress provides all the all the protection — at least down to the knees — that any alchemist could want.  This is especially important for Damiel, when he uses himself as a test subject.

‘New Icon Thursday’ has come and gone, giving us Oloch, the half orc warpriest. There are no new ways of saying “awesome iconic, awesome backstory”, and there are 7 more to cover, so let’s just take that as given.  Paizo made flail snails cool and cloakers sympathetic, so obviously the iconics are going to rock.

The most notable characteristics I wanted to capture in Oloch’s look were his bulk and the hardness and angular shapes in his armor. No flowing chiffon with a nipped in waist for Oloch. 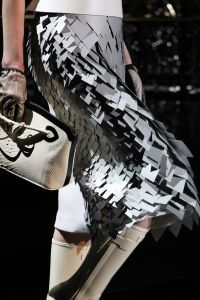 The literal interpretation of Oloch’s look is this Louis Vuitton skirt from Fall 2011 ready to wear. (Warning, you might not want to click the link, as the full outfit is very un-orcish.  The skirt is the only good part. The complete look is, in fact, nipped in at the waist.)

This look (Yohji Yamamoto, Fall 2013 ready to wears) contains all three of my Oloch characteristics and then adds a purse that matches his flail. (Flail-purse is the new flail snail?)

Three more looks for Oloch (including one actually made from a metallic fabric!): 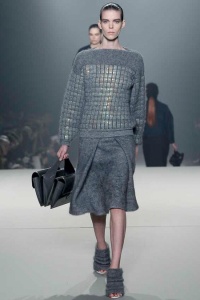 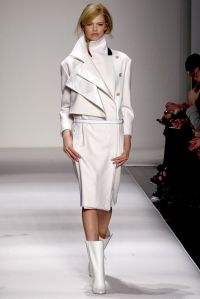 This website uses trademarks and/or copyrights owned by Paizo Inc., which are used under Paizo's Community Use Policy. We are expressly prohibited from charging you to use or access this content. This website is not published, endorsed, or specifically approved by Paizo Inc. For more information about Paizo's Community Use Policy, please visit paizo.com/communityuse. For more information about Paizo Inc. and Paizo products, please visit paizo.com