Anyone who watches Project Runway enough is familiar with the questions “Who’s your girl?” and “Where is she going?”  The answers for Saint Lauren’s Spring 2013 Ready to Wear Collection are clearly, “Ailson Kindler” and “Killing monsters in Ustalav“. 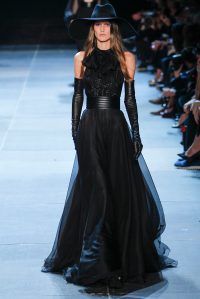 The whole collection would be pretty fantastic as the wardrobe for a Carrion Crown party.  Everyone gets a Monster Hunting hat that would make Imrijka proud.  Many have an Injustice Fighting coat worthy of Quinn.

I had been working on a post to dress Lem, using a lot of Balmain: elaborate jackets, skinny jeans, and a ton of swagger.  Looks like these:

But then Saint Laurent’s 2015 Spring Menswear collection came out. And said everything I had had to say about Lem, making references to Keith Richards, Chris Robinson, Jimi Hendrix, Robert Plant, Lenny Kravitz.  I have nothing useful to add.

This website uses trademarks and/or copyrights owned by Paizo Inc., which are used under Paizo's Community Use Policy. We are expressly prohibited from charging you to use or access this content. This website is not published, endorsed, or specifically approved by Paizo Inc. For more information about Paizo's Community Use Policy, please visit paizo.com/communityuse. For more information about Paizo Inc. and Paizo products, please visit paizo.com
Loading Comments...