Last post introduced some of the technological innovations that appear in Father Zantus’s turtleneck.  Now I’m going to delve into one of them: knit fabric. 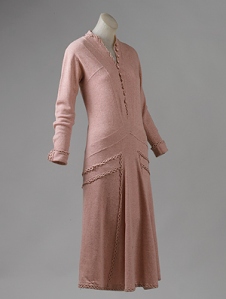 Knitted garments have existed for thousands of years. This article has a thorough history and analysis of the history of knitting.  She concludes that knitting began in Egypt around 1000 CE. (For comparison, fabric woven on looms dates at least to 5000 BCE) The earliest knitting was done with multiple needles to create tubes of stretchy fabric, for socks and gloves.  Knitted undershirts didn’t appear until the 1500s.  Until knitting machines came on the scene in the 1600s, knitting fabric was more time consuming than weaving it, and so was reserved for smaller items that required stretchy fabric and luxury goods.

Knit fabric only became common in the Victorian Era (as underwear) and not until the 1910s as clothing. It was scandalous when Coco Chanel and Elsa Schiaparelli popularized it for outerwear.